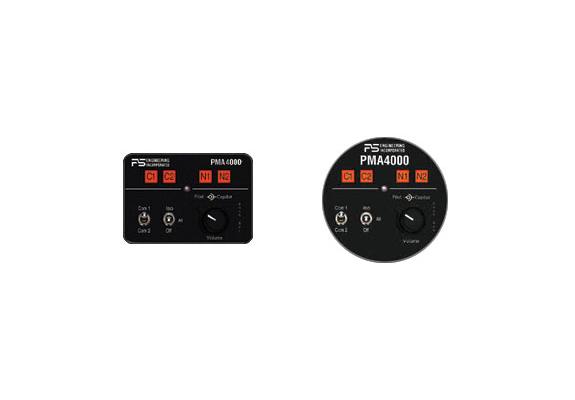 The PMA4000 is a 4-place panel mounted intercom with added capability for switching two communications transceivers and navigation receivers, as well as providing a speaker amplifier. The intercom features PS Engineering's exclusive IntelliVox with i

The PMA4000 is a 4-place panel mounted intercom with added capability for switching two communications transceivers and navigation receivers, as well as providing a speaker amplifier. The intercom features PS Engineering's exclusive IntelliVox® with individual volume controls for both the pilot and copilot.

The PMA4000 has independent intercom volume controls for the pilot, and the copilot. Because this system was designed with the tandem cockpit in mind, the copilot volume can be remote-mounted in another location. Because the pilot and copilot volume control does not affect the aircraft radio volume, balance between the intercom and radio audio is easily achieved. For instance, by reducing the pilot's intercom volume, the aircraft radio volume will be in the foreground, while the intercom will be at a background level.

The PMA4000 takes advantage of PS Engineering's revolutionary IntelliVox® intercom squelch system. By harnessing the computational power of microprocessors, the PMA4000 eliminates complicated squelch adjustments. In addition, by using independent microphone circuits unwanted noise is kept out of the audio. Since only the microphone being spoken into is open, extraneous cabin noise is minimized. Individual squelch controls mean that the system can be tailored to different microphones, as well as variations in voice levels in the cockpit.

The PMA4000 has two switched com transceiver inputs and two switched navigation receiver inputs. In addition, there are four un-switched audio inputs that can be used for other receivers or audio warnings such as autopilot disconnect or GPS alerts.

There is a built in speaker amplifier in the unit. Pushing the volume control will place all selected audio, or any un-switched audio present, over a cabin speaker.

With the PMA4000 installed, both pilot and copilot have transmit capability over the aircraft radios. Only the person who presses the PTT is heard over the radio. The selected com LED shows green when selected, and flashes during radio transmissions. This feature acts as a stuck microphone indication.

The COM transceiver switching is automatic. When the toggle switch microphone selector is in COM 1, the receive audio and microphone signals are both presented to the audio. The push button selector controls receive audio only., and is used to select multiple com receivers.

The PMA4000 provides entertainment input. When the intercom or aircraft becomes active, the music will automatically mute, allowing communications without distraction. When the activity cases, the Soft-Mute™ circuit gradually returns the music to the original volume. A slight delay prevents lost syllables and choppy conversation.

In our non-FAA certified unit, an optional internal digital recorder (p/n 11941) can provide up to one minute of stored aircraft radio reception. This device is a continuous loop recorder that automatically starts recording the instant a radio transmission is received, with no dead air time recorded. By pressing a momentary switch, the last recorded messages will be replayed. Up to 16 messages (or 1 minute) can be stored.

An optional configuration is available with a remote-mounted volume control for the copilot, a great option for tandem aircraft.